Inter Allies in collaboration with the Tema Juvenile Football Association organised a mini tournament for juvenile teams (colts) in the Tema district, on Saturday 20th December to help in the development of grassroots football.

In the last few the technical department of Inter Allies has generated plans to create for children, the opportunity to be introduced to football through grassroots activities in the aim of nurturing talents.

These youth projects have seen amateur footballers realise their dreams and turned to professional footballers at the highest level.

The main objective of these activities is to promote an interest of football in the participating youngsters. 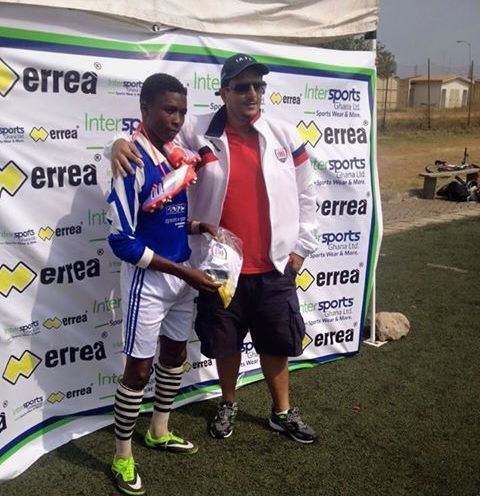 The Tema Sports stadium hosted the mini event with the teams out for 20 minutes in each half for kids who were 17 years old and below as required by IAFC.

REWARDS: In all, twenty players were selected from the project and awards were given to players who excelled, below are the four players who were awarded.

Top Scorer – Bernard Quarcoo from Texas International with four goals. The younger was immense with striking abilities, he scored one for his club during the first round and later scored three for the selected side.

Best Defender – Evans Oppong from Young Schweppes was adjudged the best defender after exhibiting leadership qualities at the back in the games he played.

Promising Player – Umar Faruk from Chelsea Youngsters dazzled the fans who turned out his exploits.

Each award winner was given a pair of boots plus Inter Allies branded jerseys provided by kit sponsors Errea.

All the seven participated teams were given an undisclosed amount as appearance fees funded by Inter Allies.

NEXT: The next destination is the Accra East Division (Teshie, Nungua, La, 37 and OSU area). The date and venue will soon be released, follow our social media accounts for latest updates concerning the mini tournaments. (Twitter: @InterAlliesFC / Facebook: Inter Allies FC)