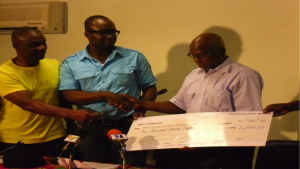 Inter Allies FC believes in social responsibility as it helps in solving various problems in our society. The Management of the football club in their effort to help retired footballers donated an amount of 2000 Ghana Cedis as a small token to the Retired Footballers Association of Ghana.

The club from time to time hopes to them with the little they would get. The philanthropic gesture was done during a short ceremony to officially enlist all members of the association onto the National Health Insurance Scheme.

“We are very grateful for this gesture done today because some of our members who in fact won the four African titles for Ghana have become destitute,” RENFAG chairman, Ibrahim Sunday said.

“These are heroes who played for the national team without monetary consideration but have now become liabilities to themselves and their families” he concluded.

The occasion was also used by RENFAG to appeal to cooperate bodies to come to their aid and was also used to medically screen participants. Meanwhile Inter Allies FC would continue with its social responsibility to help the in the development of the whole nation.