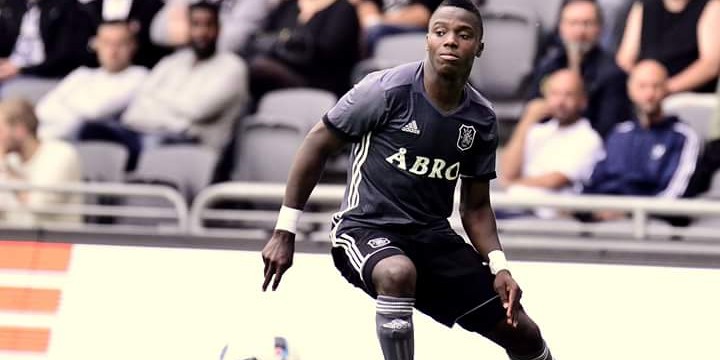 19-year-old Ghanaian Patrick Kpozo have gained more playing time in AIK recently. After the insert in today’s derby against Hammarby hailed the talent of trainers and teammates.

– The curve that he can take … It’s exciting, because he has huge potential, says Nils-Eric Johansson FotbollDirekt.se.

In late May, Patrick Kpozo made his Allsvenskan debut in the away meeting with Gefle.

Since then, it has become more and more playing time for the young Ghanaian in both the headlines as the qualifiers for the Europa League.

Today Kpozo had to start in a new wingback position out left in the derby against Hammarby, and hailed by coach Rikard Norling after the game.

– Patrick Kpozo is one of the players that make it really good today, Norling said at the press conference after the game.

– The best part of the dense match making is that it gives players the opportunity to get the chance. You can not play with the same eleven all the time, and that is an advantage. He’s got game time and grows with it.

AIK captain Nils-Eric Johansson joined in the praise for Kpozo.

– The curve that he can take … It’s exciting, because he has enormous potential. He’s fast, he’s strong and he is skilled with the ball. It’s fun to see, he developed all the time. But he’s a young guy, so we have to be careful with him and not run out on him. There he has and learn is the experience of playing games, and that he will get to do. It’s just to see where he will end up, for it will be something big, says Johansson FotbollDirekt.se.

– There is little about the position of the game he needs to improve, and it is quite natural. It’s been out there myself and dreamed away sometimes. But that is just crying and lying on him and make sure he’s awake.

AIK won the derby against Hammarby 3-0, and Kpozo himself was happy after the game.

– It was a great victory. We had decided to win and deserved it, says 19-year-old to FotbollDirekt.se.

To say Kpozo about Norling tribute:

– I feel I have his confidence and he believes in me. I always try to do my best so that I get the chance.

After one of AIK’s goal in the first half Kpozo ran out to the touchline to hug Norling.

– I was so happy. He always motivates me and I was so happy that he gave me the chance to show what I can. That’s why I ran out to him.